I’ve worked in commerce for some two decades, on both the front-end and the back-end and everything in between. Over time, I’ve honed a vision for what commerce should be. I believe many of you share a similar view. Yet we struggle to deliver given the limitations of existing technology patterns and vendor solutions. In the same way I’ve challenged myself throughout my career, I challenge the industry to materialize this vision. Here’s the story of my work on Adobe.com

A New Vision for Commerce

As shoppers, most of us are into one product category or another and some of us are into more than our finances support. For me I love gear. I love electronics gear, outdoor gear, sailing gear, hunting gear. Anything that acts as an aid to my hobbies, whether truly required or valuable, I’m all over it. Some of you may be into hand bags or collectibles, shoes or toys. Whatever your shopping vice, we can probably agree that the research and shopping portion of the journey are just as wonderful as the purchase itself.

Which is why I have always been disappointed with online shopping.

If I’m trying to buy a raincoator fancy backpacker style tent online, I want more information on why there is such a broad selection of products. What are the differences? Why is one item better than another? Retailers have been just plain lazy in how they merchandise online. Their typical, lack-luster responses to my questions include “faceted search” and ”sorts” on price or reviews.  Even manufacturers struggle to articulate why they created so many similar products in a category. We all put a lot of love and passion into product development. It’s just seemed crazy to me that we’re still mostly showcasing them as thumbnails in rows and columns online.

While at Adobe we encountered the typical challenge where we created these beautiful marketing pages and then customers had to go to an (ugly) ecommerce site to buy once they hit that point of inflection. Our goal back then was to radically shift our business from the channel to direct sales. It was obvious after looking at the analytics and going through the buy flow, we couldn’t have two sites. We had to transform that beautiful marketing site into the store. 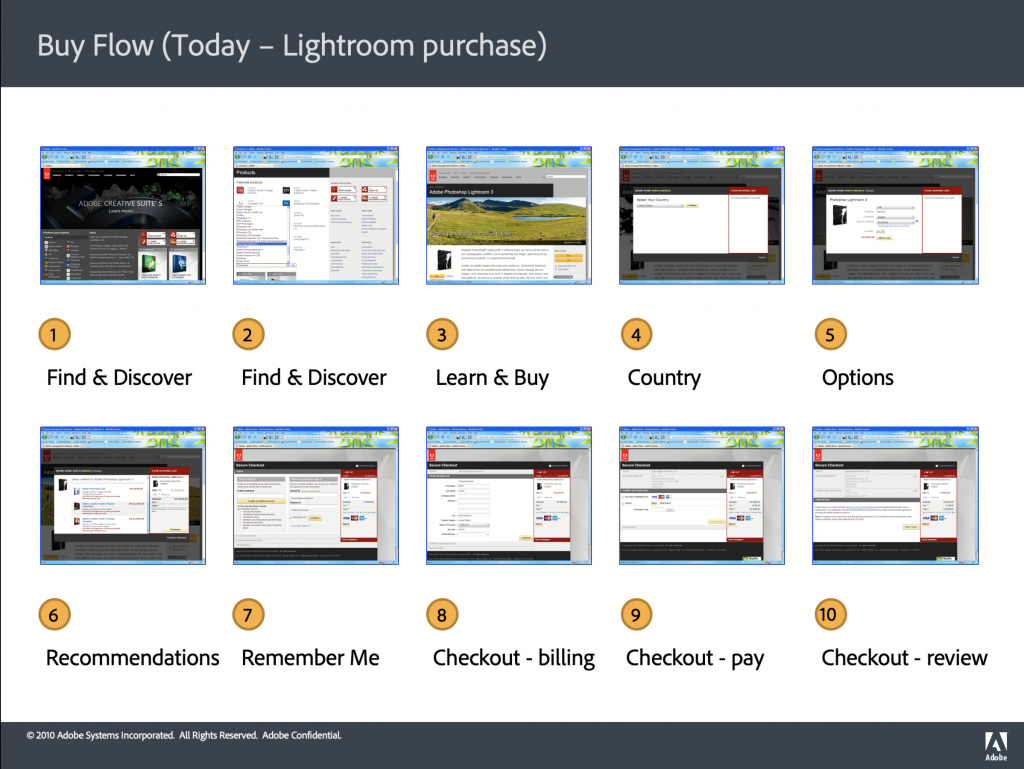 Who Gets Experience-driven Commerce Right?

The technology pattern that allows marketers to create any compelling experience they want and then make them shoppable has been a CMS, which in turn calls a headless commerce solution via an API. It seems simple enough, yet most of the ecommerce vendors out there are running on really old architecture patterns where the system is designed to deliver a home page, category pages, product detail pages, cart, and checkout…aka, the web shop. 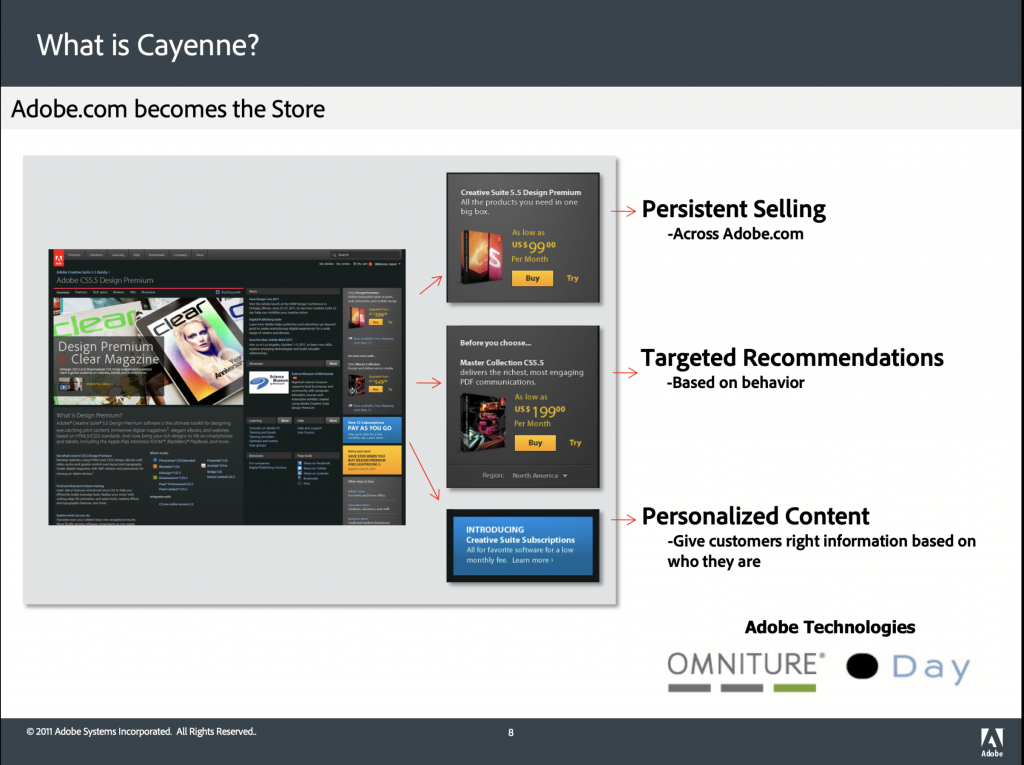 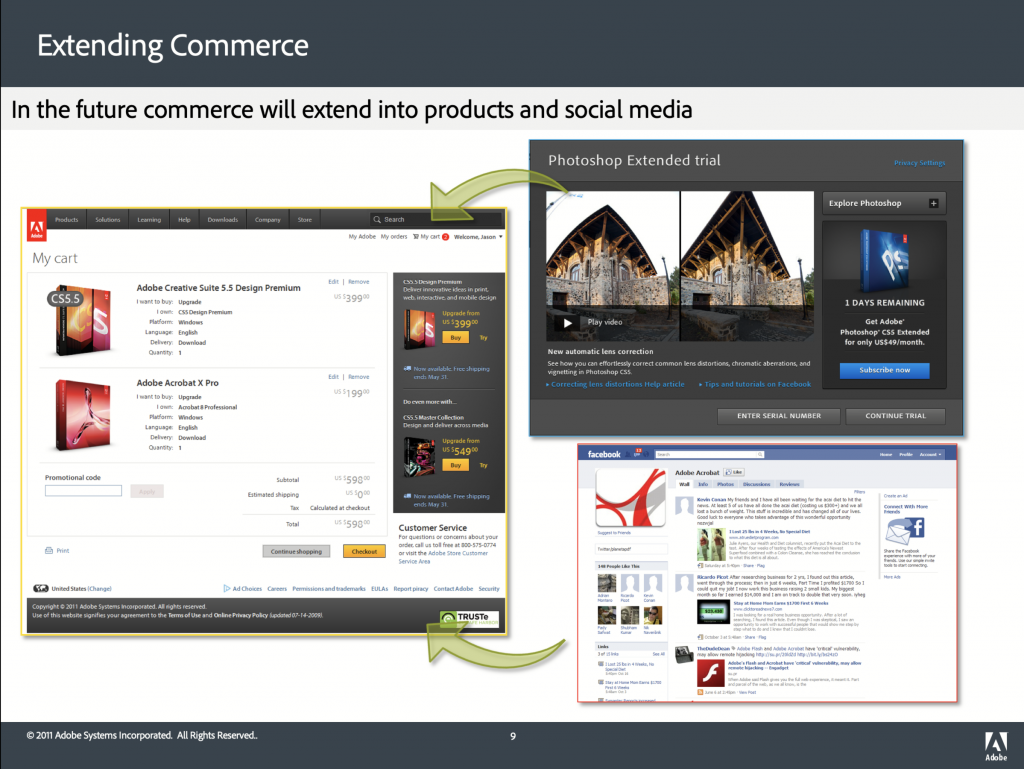 When we attempted to transform Adobe.com with ATG (now Oracle Commerce) and Day Software’s CQ5 (now Adobe Experience Manager), we quickly found out ATG’s API wasn’t complete enough and had too many holes to bother with. Unfortunately, we purchased ATG as we thought we might acquire the company later. They were bought by Oracle and continue to pursue a web shop model, although they have improved their API (ten years later). 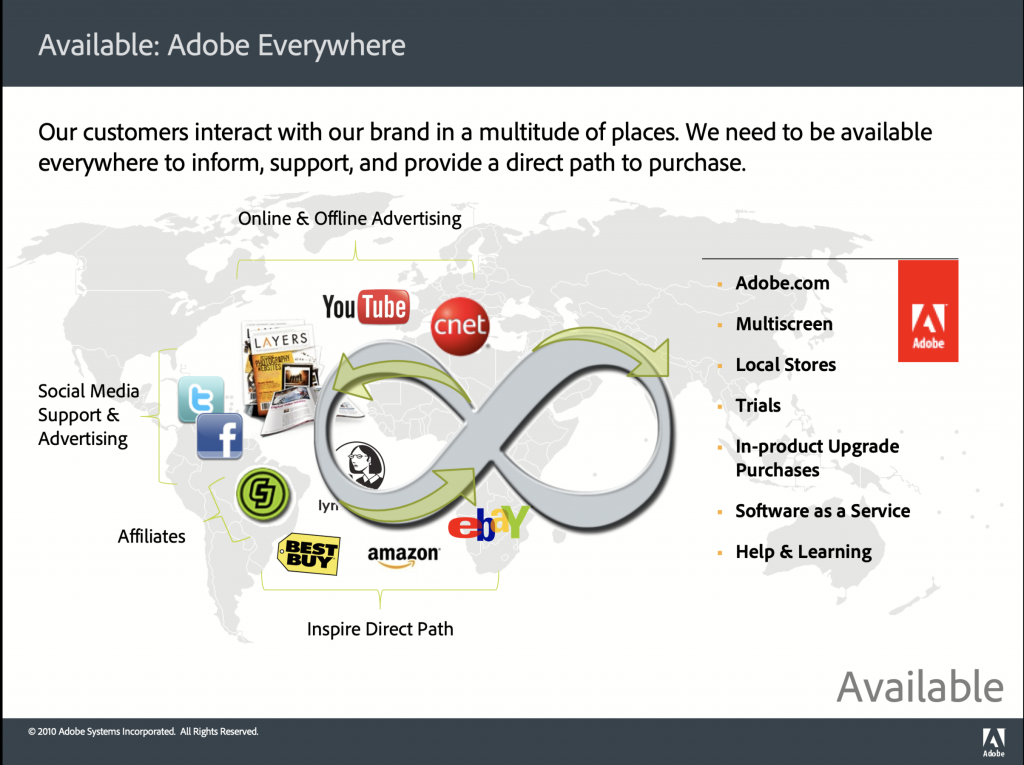 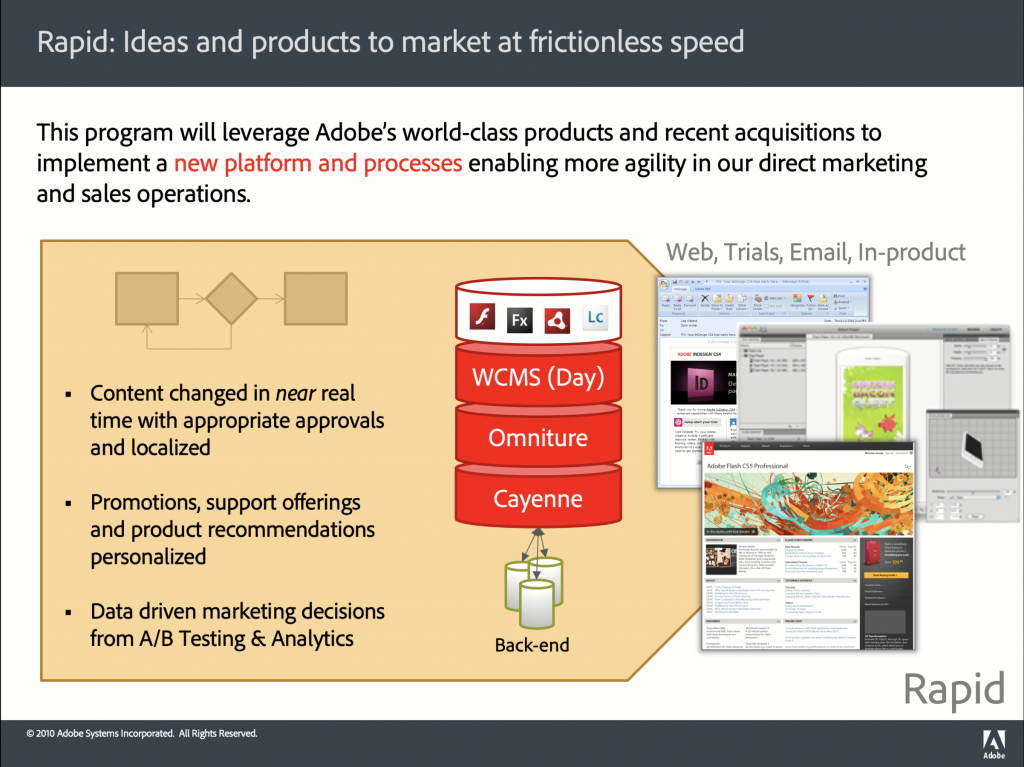 During this large program, called Adobe.com Transformation, we also had evaluated Elastic Path.

Everyone was enamored with Elastic Path. The developers loved it and marketing did too, as we knew we’d be able to weave together our dream experience. I actually think our idea of combining “content and commerce” with the CMS and ecommerce stack was largely influenced by Elastic Path’s capabilities and a key architect that joined us from Amazon (he put me on to microservices before the term was coined). We also had a lot of fun settling debates in meetings quoting Linda Bustos from getelastic.com There’s a great case study by Harvard Business Review that outlines this journey we took at Adobe, so I won’t expand on it more.

Once we implemented our vision for Adobe.com, making the site the store, we saw immediate results. Our conversion rates went up and it was not only noticeable in the analytics, but also in the actual sales reports. We were taking the same traffic and making a lot more money… In a few years Adobe.com went from a little over USD $200M annually to nearly $750M. The site now generates over USD$1B (Internet Retailer Top 100). 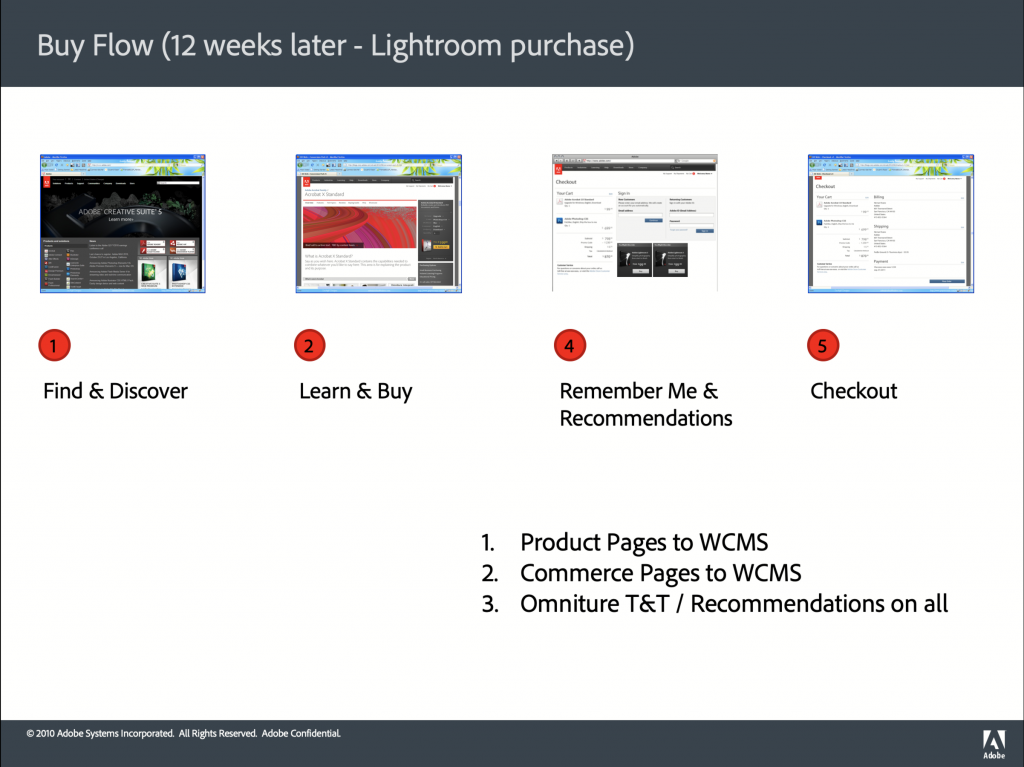 I began evangelizing the idea of experience-driven commerceand searching for the technology pattern required to pull it off. I switched business units and joined what became the Digital Marketing BU. My charter was product strategy and marketing for the idea, with the added goal of finding a commerce engine to acquire that would allow Adobe to deliver this capability.

While we started out dancing with Hybris (which was later sold to SAP… a story for another time), we eventually evaluated and collaborated with most of the ecommerce platforms on the market. All but one struggled to deliver full capabilities as an API so we could manage the shopping experience in Adobe Experience Managerand take advantage of other products such as Adobe Target, Audience Manager, etc.

Here’s what we found:

ATG’s API was incomplete with version 10 and only as of the latest version (11.3) is there a full REST API. But, it’s effectively on an EOL path with a novel attempt at a re-write, and Oracle’s new vision misses the point about customization. Oracle Commerce Cloud, the cloud version of ATG, limits customizations to webhooks and still focuses on the web shop pattern.

Hybris’ API was designed mostly for a mobile app. You could get product information out of it and engage the cart through checkout, but we had a lot of customers that ran into problem after problem trying to make it work. Simple use cases like being able to request a product from a staging environment were not supported by the API. The API only knew about products in the live production site. Hybris is now owned by an ERP company that created the reason for ecommerce to be a separate solution in the first place.

Magento had an old SOAP interface that had a poorly performing Rest API duct-taped on top. Even with the 2.x changes it’s still better suited for small volumes and simple web shops.

Digital River didn’t have an API yet.

Demandware wasn’t sure what to make of “experience-driven commerce”. They liked their model of forcing customers into web shop templates. Ironic given their target audience was fashion retailers with beautiful products. (I always wondered what Kate Spade really thought of her web store). This SaaS version of Intershop, now called Salesforce Commerce Cloud, was initially appealing to business owners, but they soon run into all sorts of brand problems as they try to choreograph experiences across digital touchpoints.

Intershop posed similar challenges to Demandware and we later learned that it essentially was Demandware (I’m pretty sure Salesforce didn’t know this when they bought it, but hey, they can just keep buying solutions until they get one that works for their customer base.)

IBM WebSphere Commerce came close with a recent REST Level 1 API, but it was similar to Magento in that it was a “RESTified” SOAP interface and required a great deal of expertise to use. So much so that the partner helping to integrate Adobe and IBM gave up on a couple of areas and tried to just make the argument that WCS should drive those pages (and thus the side by side pattern emerged – even though this breaks the first guiding principle of enabling marketing with a single tool for experience).

And then there was Elastic Path. Unapologetically API first. Not a REST-ified SOAP interface like WCS and Magento. Not a partial API that misses checkout like Salesforce. Not a mobile app-only API like Hybris that misses simple use cases like being able to test multiple versions and environments. Elastic Path had engineered the most advanced, and thoughtful API for marketers and commerce professionals to bring to life their ideas of enabling any commerce transaction at that point of inflection where they have excited customers enough to buy—ether by pumping the tongue of a shoe, calling out from the shower or walking into a store with a wearable device.

Elastic Path had already skated to where the puck was going (they’re Canadian, so I figured they were trained on this concept more than others). They had already envisioned these use cases and were excited to show how easily they could enable any client application or shopping experience whether through a CMS or custom app.

And the thing that stuck with me over the years? Elastic Path just worked. It worked for really large transaction companies like Symantec who wanted to embed commerce in their own applications and it worked for smaller companies across any industry. Unfortunately, sometimes you don’t get to buy or implement what the team really wants due to the normal “complexities” of a large company, but I was hooked on the idea of headless commerce.

What is cayenne deck jan 2012 v7-redacted from Darin Archer 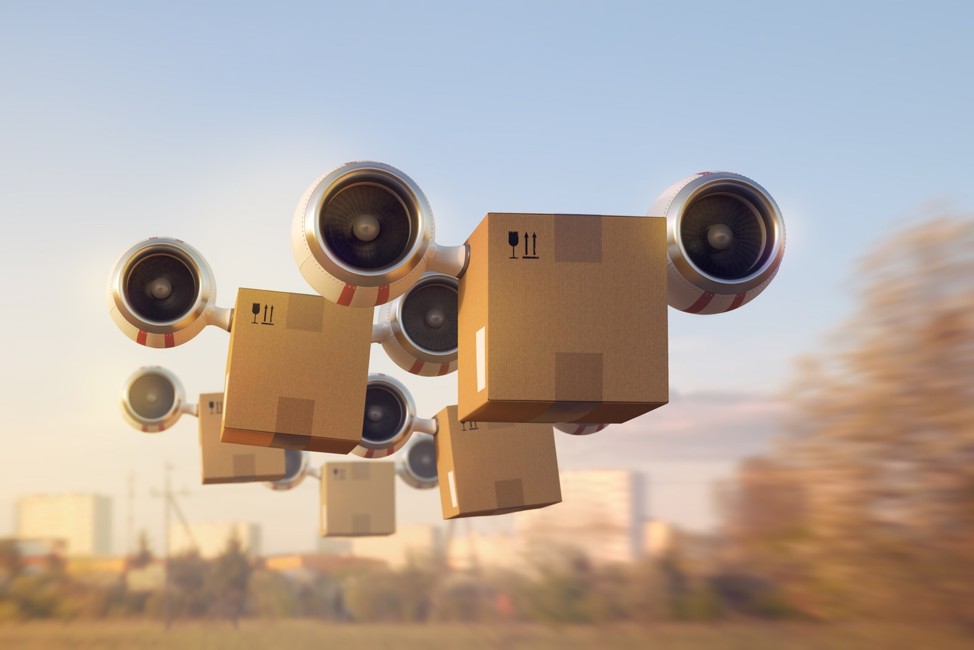 What about the Internet of Things and ordering through Alexa?

The smartphone gave rise to IoT. Just like the dot.com boom inspired one of history’s largest telecommunications build-outs, which later provided the bandwidth for the web to deliver the experiences marketers originally envisioned in the 90’s. Smartphone adoption paved the way for inexpensive compute inside small packages with wireless capability. Thanks to Apple, Google and the Android operating system, the bill of materials (BOM) for a device to have a sophisticated OS, great compute power and wireless connectivity dropped to a level where entrepreneurs’ could invent pool sensors that can tell you when to add chemicals.

Recruited away from Adobe by Intel to define retail solutions that would take advantage of this upcoming re-imagining of everything around us, I took a detour deep into the historic Silicon Valley. During which I learned a hell of a lot more about silicon and the integrated circuit than I would have ever imagined.

It was while working at Intel on IoT products and collaborating with many innovative retailers that I realized we not only needed to have experience-driven commerce in our mobile apps and websites, but that everything around us was going to become electronic commerce.

I worked with retailers trying to actually figure out how to identify a customer in the store and just let them walk out without going through the point-of-sale (self-checkout). We collaborated with toy manufacturers that wanted to have the box or toy itself somehow interact with a digital deviceto buy accessories (same use cases in B2B for replenishing devices in life sciences companies). There were companies with vending machines (Best Buy in airports) and many others creating new, and strange, pizza ordering experiences.

Obviously the convergence of physical and digital experiencesbecomes a reality over time (though costs still must come down). While my assertions had expanded and I had a focus on bringing the digital into the physical realm, one company kept delivering on this commerce vision, Elastic Path.

Today my aim is to help other digital commerce practitioners accomplish similar results and create e-commerce experiences we’ll all love.